MEFCC (Middle East Film & Comic Con) is the only event held for fans of cult entertainment and popular culture in the Middle East. I spent my entire weekend at this event and I do not regret spending a second there. The event helps inspire future artists, writers, directors and entrepreneurs in the entertainment/art industry. This was my first time ever attending a Comic Con and I had heard there would also be 9 stars attending. I found out that one of them was Giancarlo Espositos, who everyone knows as Gus from the hit tv show Breaking Bad but I know as Major Tom Neville from Revolution.
I saw people expressing their love for film and comic books through cosplay and artwork. I met a boy by the name Abdulrahman Al Dark who was only 15 years old and could draw better than anyone I had seen before. I saw a lady who had a sign on her desk saying “i'm deaf please write because I won’t understand you,” this showed me that nothing can stop you from following your dreams. As I walked through rows and rows of talent, I realised MEFCC gives people a chance to show others what they are good at.
They had a stage setup for competitions such as talent shows, impersonations and best cosplay. Everyone would gather around the stage to listen and watch people perform. The 9 stars had Q&As at specific times, where people gathered together to ask them anything on their mind. I attended Sylvester Mccoy (the 7th doctor in the tv show Doctor Who and Radagast in The Hobbit) and Giancarlo Espositos’ Q&As. These 2 men were very inspirational, I did not for a minute feel like leaving the room for the 1 and a half hours I was there. They spoke in such ways which makes you wish you could be like them.
Behind the Q&As room was where all the celebrities would go to when they were on their break. No one except the stars, bodyguards and organisers were allowed beyond that door. Max Landis (Screenwriter of Chronicle) knew Ms Guidera and we were able to get a private interview with him, he took us behind the Q&As room and into his bedroom. We sat down and began to talk to him. While interviewing him, Michael Jai White (Bronze Tiger from the tv show Arrow) walked into the room and we all started screaming. Max told us to be quiet as it was unprofessional of us and we could get kicked out. Through that hour long interview we were forced to keep calm while all the stars walked in and out of the room we were sitting in. I had never experienced something like that in my life before. At the same time we were interviewing Max Landis, the Q&As room was full as there was a video conference with Stan Lee. We unfortunately had to miss that but it was very worth it.
In film class we are learning about superheroes and villains and we had just watched the movie Chronicle. Interviewing Max Landis, gave us a good view on superheroes and villains. He told us that villains revolve around how the superheroes are built, if batman's villain versus batman, batman will win but if batmans villain was to verse spiderman, spiderman would have no chance. MEFCC is a place where people can express their love towards film, comic books and art. It is an event for anyone and everyone. I could not imagine all the regrets I would've had if I did not attend. 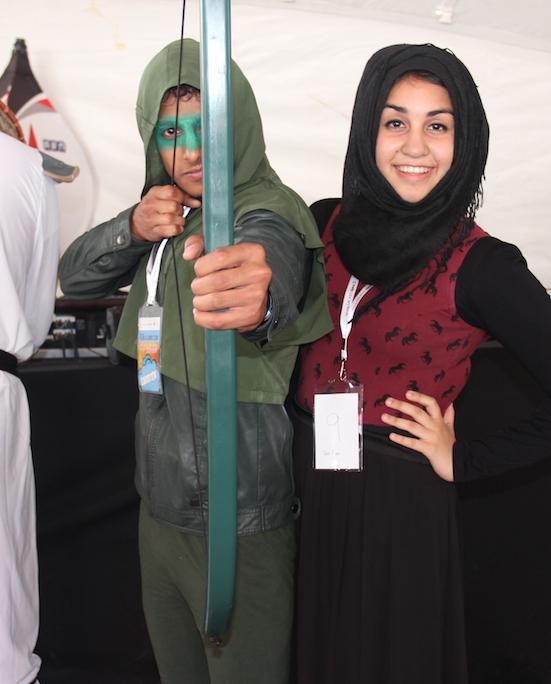